Richard Stallman on being a hacker:

When I say I am a hacker, people often think I am making a naughty admission, presenting myself specifically as a security breaker. How did this confusion develop?

Around 1980, when the news media took notice of hackers, they fixated on one narrow aspect of real hacking: the security breaking which some hackers occasionally did. They ignored all the rest of hacking, and took the term to mean breaking security, no more and no less. The media have since spread that definition, disregarding our attempts to correct them. As a result, most people have a mistaken idea of what we hackers actually do and what we think.

With this in mind, at a previous job, I was fortunate to be able to attend several conferences during the summer of 2007, and one of the conferences I attended was the Chaos Communications Camp, just outside of Berlin.

People take lots of photos at these things -- here's a photo of me with Jeremy Seitz, taken by Mike Castleman and here's another, showing me tinkering with a payphone, this time taken by Jeremy Seitz.

This is all good, I have a couple of neat photos of me at a conference with some cool people.

So here's where it gets a little weird... there's also another photo of me, this time taken by a professional photographer. 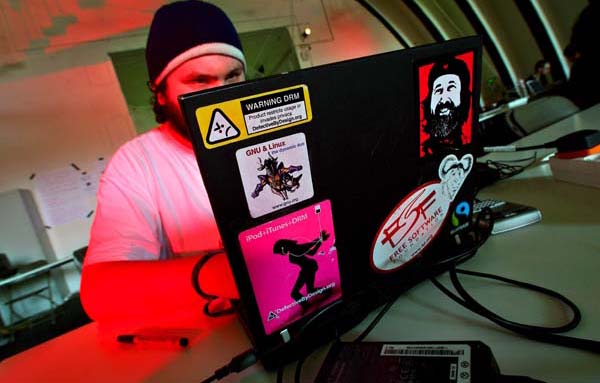 I do vaguely recall having my photo taken. I didn't sign anything however.

Upon my return to the UK, my colleagues at work informed me that I'd been in The Guardian, and sure enough, checking the newspaper's website, I was there, as part of a collection of '24 hours in pictures' for August 10th, 2007.

This seemed like a reasonable mistake, but my attempts to contact The Guardian and also the photographer were not satisfactory. Unable to be able to get a free license (CC-BY or CC-BY-SA) of my own image, I made a copy of the image and promptly forgot all about it.

Until today, March 2nd 2010, when my colleague at my new job passed me a support ticket with the message "OMG".

Here's the story, as it appears in 'publico.es'

The Civil Guard has arrested three persons allegedly responsible for a network of cyber criminals who had control over 13 million PCs "zombies" that those arrested illegally handled remotely without the knowledge of their owners.

Arrested personal and financial information obtained through these "compromised computers" who controlled remotely.

The "zombie computers" are commonly used by criminal networks for illegal transactions or steal bank details, what is worse, as battering rams in a coordinated attack against a government network or a financial institution.

Those responsible for crimes Telematics Group of the Civil Guard (GDT) dependent on the central unit of the armed Operativa (UCO) will offer a press conference tomorrow to give more details of the operation.

Wow. So, someone found this article, saw the stickers on my laptop and emailed it to us... they understand that having someone using free software is unlikely to be a victim of this crime, but for me, I wonder if I am not some kind of 'super awesome hacker', at least in the eyes of the media.

A little more digging reveals that I am quite popular as a piece of stock photography now...

That's all I've found so far, but if you can find more uses of my new found career as an elite criminal mastermind/stock photo celebrity, please write to me — mattl@cnuk.org.